Paris, whose quote reads: "Capital faithful to itself and to France", received the Cross of Liberation on March 24, 1945.

On June 10, 1940, Paul Reynaud’s government left Paris for Tours before heading to Bordeaux. On June 12, the capital was declared an “open city” and, on June 14, German troops marched victoriously along the Champs-Élysées in deadly silence.

The German occupation was implemented very swiftly, with swastikas floating on all public buildings, largely occupied by Germany’s troops and administration officials.

In Paris, as elsewhere, the will to resist initially manifested itself through intellectual reactions. As of August, the first clandestine document, written by Jean Texcier in reaction to the occupation, was distributed via a Parisian bookstore featuring a list of tips for occupied citizens. In October 1940, the first issue of a clandestine informational pamphlet, Pantagruel, emerged, written by Parisian printer and publisher, Raymond Deiss. In mid-November 1940, surrounded by nine trade unionists of the General Labor Confederation (CGT) and three from the French Committee of National Liberation (CFTC), Christian Pineau published a manifesto which rejected discrimination based on race, birthplace, religion, opinions and money, before publishing the first issue of the newspaper Libération a few weeks later, which he made sure was published regularly on a weekly basis using his own resources.

The Paris student demonstration of November 11, 1940, at Place de l'Etoile was the first collective expression of resistance to take place in broad daylight. The Germans shot into the crowd and a hundred demonstrators were arrested. Soon after, the first round of execution notices were plastered on the walls of the capital, including that of Jacques Bonsergent, shot on December 28, 1940.

A few days earlier, the first issue of Résistance – secretly written by the Musée de l'Homme group led by Boris Vildé and Anatole Lewitsky – as well as the first few issues of Valmy were published. During this period, the Civil and Military Organization (OCM) movement led by Jacques Arthuys was established, as well as the movement Those of the Liberation (CDLL) on the initiative of Maurice Ripoche, which recruited from the French Air Force and began by carrying out intelligence work.

However, the Musée de l'Homme group was dismantled in early 1941. The crackdown intensified, as did the determination of the Parisian Resistance. On July 14, a patriotic demonstration at Place de la République led to the arrest of 1,500 people. On August 21, Pierre George, aka ‘Fabien’, shot down officer cadet Möser at Barbès metro station. A week later, the Germans shot 18 resistance fighters at Mont Valérien in Suresnes, including Lieutenant-Commander Estienne d'Orves and his comrades Emile Barlier and Jan Doornik.

“Capital faithful to itself and to France, demonstrated, under the enemy occupation and oppression, and in spite of the voices of abandonment and treason, its unshakable resolution to fight on and to win. By its courage while in the presence of the invader and by the indomitable energy with which it sustained the harshest of trials, deserved to remain as an example for the entire Nation. On August 19, in cooperation with the Allied and French armies, stood up to drive away the enemy through a series of glorious fights which began in the Cité and swiftly spread to all points of the city. In spite of heavy losses sustained by the French Forces of the Interior fighting on its soil, liberated itself through its own efforts and, united with the vanguard of the French Army that came to its rescue, has, on August 25, reduced the German to his last stands and made him capitulate.” (Paris, Companion of the Liberation by the decree of March 24, 1945)(Paris, Compagnon de la Libération par décret du 24 mars 1945) 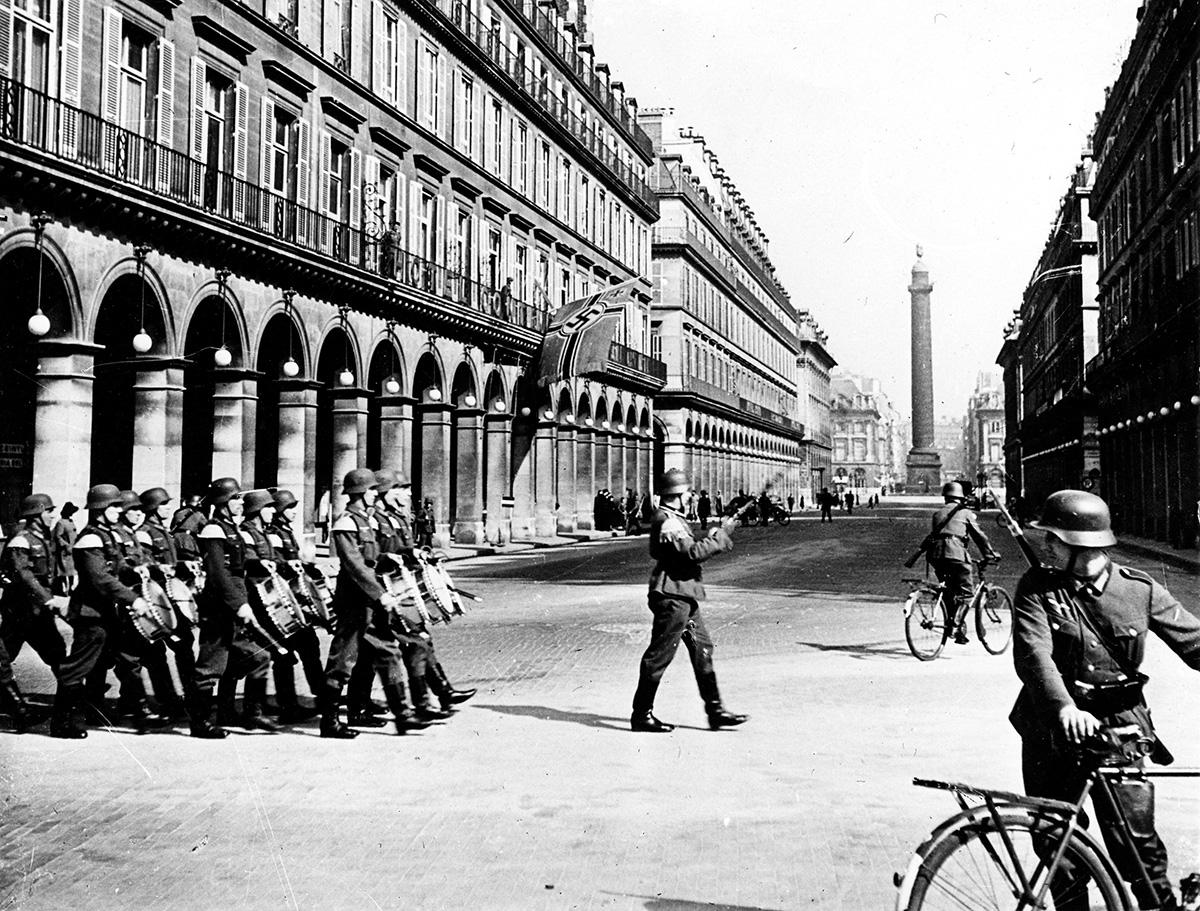 In December 1941, the curfew in the capital was fixed at six in the evening and the prisons were filled with hostages and patriots; on December 15, Gabriel Péri was shot.

In 1942, living conditions in Paris deteriorated. In March, bombing of Renault factories in Boulogne-Billancourt by the Royal Air Force killed 350 people and injured 500. On March 27, the first convoy of Jewish deportees rounded up in Paris and the surrounding region left Compiègne for Auschwitz.

Attacks, followed by executions of hostages, multiplied. The “Five Martyrs of the Lycée Buffon”, members of the Free Fighters and Partisans (FTPF) movement and responsible for carrying out two attacks against German officers, were arrested by French police in June 1942. Handed over to the occupier, they were sentenced to death and executed a year later.

On July 16-17, 1942, anti-Semitic persecution reached its height with the Vel 'd'Hiv' roundup carried out by the French police: almost 13,000 foreign Jews – including over 4,000 children – were arrested in their homes, held at the Vélodrome d'Hiver then deported to extermination camps in Poland.

Coordination of the Parisian Resistance progressed during 1943, particularly thanks to missions carried out by envoys from Free France – such as Pierre Brossolette and Colonel Passy – who came from London to establish closer contacts between internal and external Resistance groups.

Also in Paris, the National Council of the Resistance (CNR) met for the first time on May 27, 1943 under the chairmanship of Jean Moulin. Made up of representatives of the largest Resistance movements from the two geographical zones, as well as political and trade union representatives, the Council demonstrated the increasingly tangible progress made by the French Resistance to unite and become cohesive.

While Allied bombings continued throughout 1943, the population gradually began to catch sight of its liberation. Violent attacks against the occupier began to mount: in April, a group attacked an enemy platoon with grenades; in May, a hotel occupied by Germans in Odéon was attacked; in June, a Wehrmacht colonel was shot down on boulevard des Italiens; in July, a group of SS was attacked with grenades on the Champs-Elysées; in September, SS Julius Ritter, responsible for sending 500,000 French people to Germany under the Compulsory Labor Service (STO), was executed on the corner of rue Pétrarque.

Bombings in the capital intensified in early 1944. Crackdowns continued and, in February, members of the FTP-MOI, a sub-group of the “Manouchian Group”, were executed. On March 22, Pierre Brossolette committed suicide at the headquarters of the Gestapo on avenue Foch.

But soon after, the French Forces of the Interior in the Ile-de-France region, which grouped together the armed forces of various movements, were created and placed under the command of Colonel Rol-Tanguy.

The Allied advance in Normandy soon gave the signal for rebellion and, on August 10, Parisian public services went on strike (first the railway workers, then the gendarmerie on August 13, followed by the police on August 15). On the morning of August 18, a general strike and factory sit-ins began, and prisoners at La Santé prison began to be released. That same day, Colonel Rol-Tanguy, leader of the FFI in the Ile-de-France region, posted up a general mobilization order for Parisians in agreement with the Paris Liberation Committee (CPL). The following day, barricades began to appear in all districts.

The police headquarters were seized on the same day, and firefights between French and German forces increased in Paris’ suburbs and several of its districts, which were captured by the insurgents. German police services packed up and left one after the other, but not without hastily executing prisoners and resistance fighters for what would be the last time. They also made sure to send off the last few trainloads of deportees to the camps.

On August 20, the General staff of the FFI moved into its underground command post at Place Denfert-Rochereau, under Lion de Belfort. In turn, the majority of secretaries-general appointed by Alexandre Parodi, General Delegate of the Provisional Government of the French Republic, took possession of their ministries.

Concurrently, General Leclerc was close to Argentan, while General de Gaulle, having returned from Canada the day before, met with General Eisenhower in Le Mans and convinced him to let the armored division, 2e Division blindée, march on Paris.

On August 21, the newspapers, who just the previous day were underground, were put on sale in broad daylight, while the Germans strengthened their positions, holding fast to Tuileries, Rivoli, the quays, Ecole-Militaire, Prince Eugène Barracks at Place de la République, and Luxembourg. Meanwhile, central Paris, Cité and Hôtel de Ville were held by French forces. The following day, August 22, General Bradley ordered Leclerc to direct his division to the capital, where the terrible threat of the city’s destruction loomed as a result of orders given by Hitler to the German military commander, General von Choltitz. Convinced by Swedish consul Raoul Nordling to spare Paris, General von Cholitz negotiated a short truce with him that was refused by French Resistance fighters.

At this point, it was common knowledge that the 2e Division blindée and Allied forces were on the outskirts of the city. “Stand firm. We are coming”, was the message that Leclerc sent to the FFI who were holding the police headquarters on August 24. At around 7 pm, Leclerc, who was at Croix-de-Berny, instructed Captain Dronne’s tank company to advance towards Paris. The hands on the big clock struck precisely 9.22 pm as the tank column came to a stop at Place de l’Hôtel de Ville, where the General staff of the National Council of the Resistance and the Paris Liberation Committee were gathered. Dronne was welcomed by Georges Bidault, Joseph Laniel, Georges Marrane, Daniel Meyer and many others. The meeting of Free France fighters and Paris resistance fighters was an infinitely moving moment. The church bells began to ring out to announce the arrival of Allied forces in the city.

The next day, General Leclerc, joined by National Military Delegate Jacques Chaban-Delmas, arrived in the capital where, soon after, a detachment from 2e Division blindée stormed Hôtel Meurice, the headquarters of the German military command. Von Choltitz surrendered, before being driven to the police headquarters where he signed, together with Leclerc and Rol-Tanguy, the surrender agreement of German troops. Later that day, de Gaulle arrived in Paris accompanied by a modest cortege, amid an ecstatic crowd. He then headed to Leclerc’s command post in Montparnasse where he learned about the act of surrender. 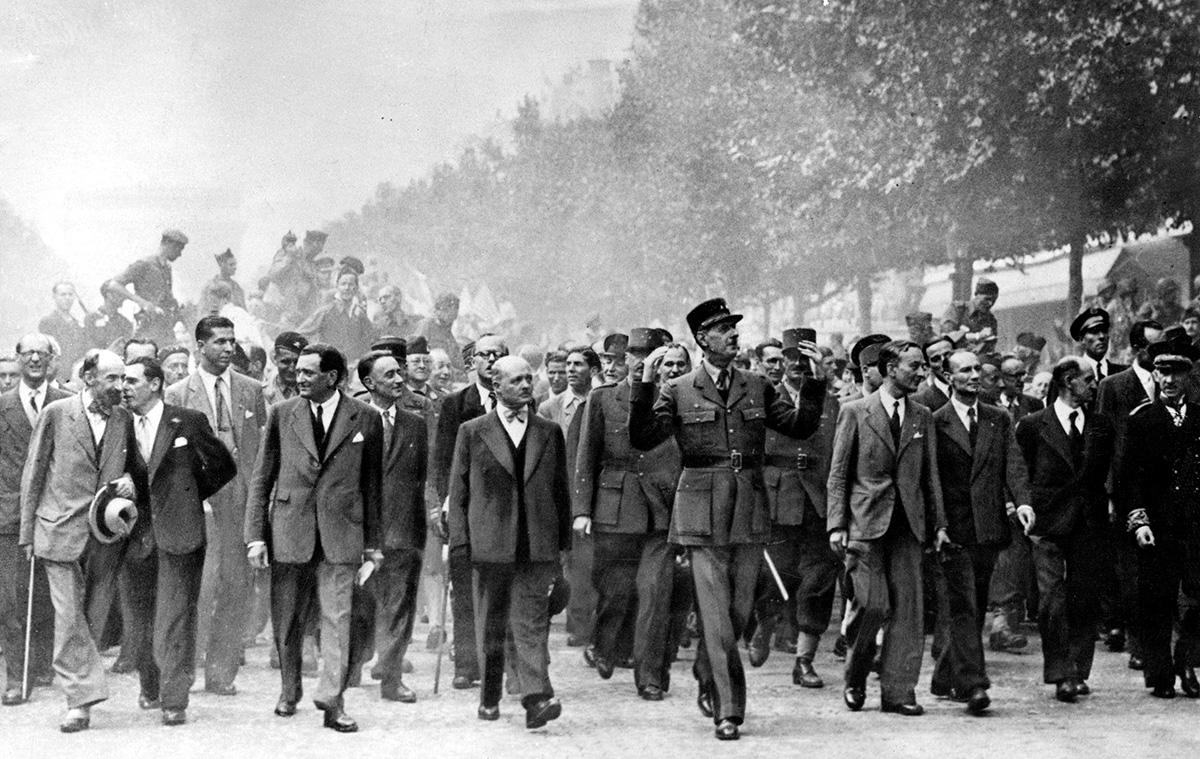 During the evening of August 25, after returning to the War Ministry on rue Saint-Dominique, chosen as the headquarters of the President of the Government, and inspecting the Parisian police, General de Gaulle headed, amid rapturous cheering, to the Hôtel de Ville where the Paris Liberation Committee and National Council of the Resistance were waiting for him. Once there, he paid tribute to France’s capital in a extremely moving speech:

At that same moment, the remaining areas held by the enemy fell, marking the end of the Battle of Paris. Parisian forces lost over 1,500 men (including 582 civilians) with 3,500 wounded, while the Germans lost 3,200 men, with 12,800 handing themselves over to the French Forces of the Interior and to soldiers of 2e Division blindée. The free world celebrated the Liberation of Paris, which heralded the henceforth inevitable collapse of Nazi Germany.

The next day, 26 August, the head of the Provisional Government descended the Champs-Élysées surrounded by members of the CNR, the CPL, generals Juin, Koenig, Valin and Leclerc, Admiral Thierry d’Argenlieu, Jacques Chaban-Delmas and prefects Flouret and Luizet to the sound of incredible public applause.

The general got into a car at Place de la Concorde and travelled to the Hôtel de Ville, before reaching the plaza in front of Notre-Dame where gunfire broke out, creating mass panic in the area. On arrival at the cathedral, yet more gunfire broke out, this time inside the building. The audience took cover on the ground, while General de Gaulle quietly took his place in the crossing before the Magnificat stood up. He cut the ceremony short and returned to the presidential headquarters on rue Saint-Dominique. 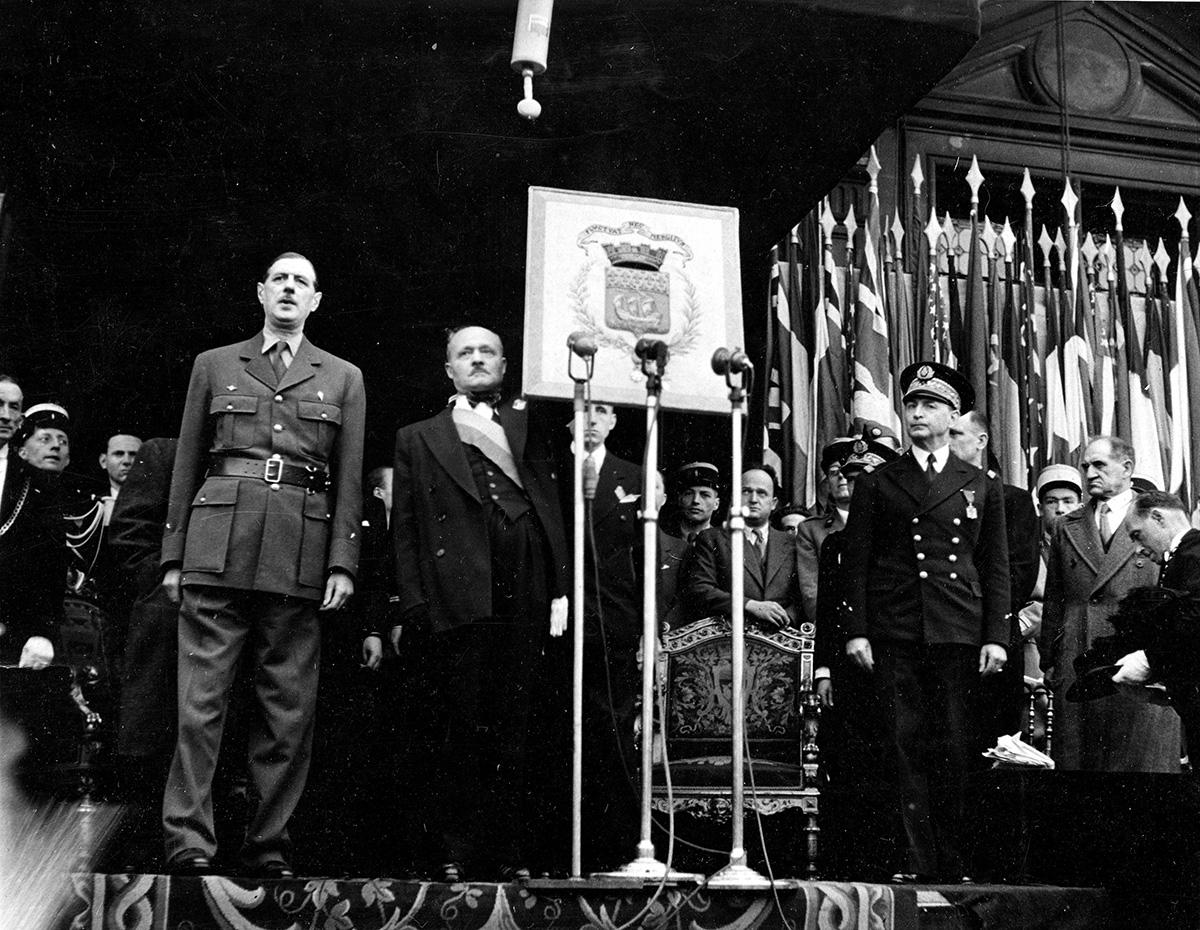 “At the Liberation of Paris, in truth, nothing lacked that was needed to be worthy of France” declared General de Gaulle as he awarded the Cross of Liberation to the city of Paris on April 2, 1945.